Do NOT Build a Franketstein

Hometown: Medford, NJ! A beautiful town with lots of lakes about an hour outside of Philadelphia. But I rarely get to visit anymore because my parents left for Retirementsville, NC

Tools of the trade: Faber Castel pencils, 2B. Regular printer paper. Sometimes I watercolor. Sometimes I use Micron pens, but they always run out so quickly. Photoshop for illustrations, Flash for animations, and a Wacom tablet.

Neil and his collection of Where’s Waldo books.

Darryl–may he rest in peace.

Illustration idol: I think what Dr. Seuss did over his whole career is pretty untouchable. Intimidating, really.

Caffeine of choice: I’m allergic to caffeine! I started getting massive migraines after even sipping a soda or coffee a few years ago. But seltzer water sometimes reminds me of when I used to drink Coke, and gives me that placebo jolt.

…as an adult: I still look through the Little Lit books Art Spiegelman and Francoise Mouly put out over a decade ago. Such a diverse, competent group of artists. That’s pretty rare in compilations.

Favorite thing to read: I try to flip between pulpy garbage for adults and Newbury winning/nominated young adult books.

YouTube video you can’t stop watching: Take on Me: The Literal Video Version. I love this song, I love this video, and the comedy element added on top of it only enhances it for me. I’ve watched it a lot…

Cat or dog? I was a dog person growing up, but fell in love with cats over the last five years.We recently lost our special cat Darryl this summer.  Still sort of in mourning, but we’d like to get a dog and a cat when we’re ready.

Take us through a piece: what’s your process like from the idea phase to the finished piece? 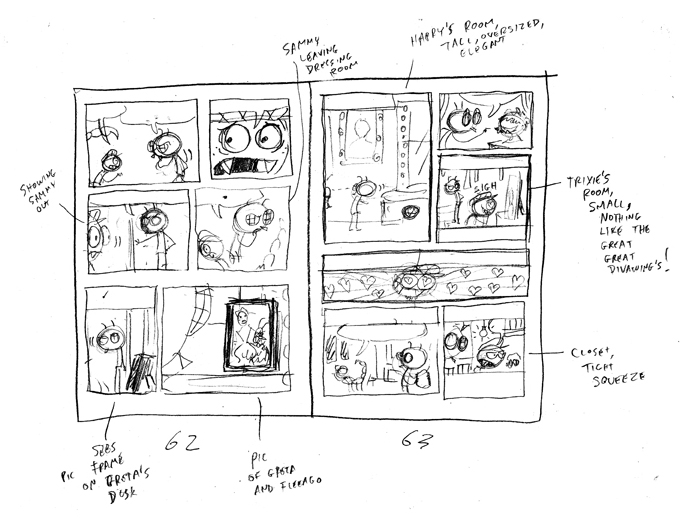 How does the process differ from writing and illustrating your own work like Do Not Build a Frankenstein, to illustrating someone else’s story like Joey Fly, Private Eye?

Well, I had a lot more fun illustrating Joey Fly. There’s not as much pressure, because I could objectively see that the writing was great. On my book, I wasn’t so confident. But I do try to regard the text as sacred once I’ve begun the illustrating phase. No changes to the text while I’m drawing, that’s using too much of my brain. Probably not the best way to go about it, but I’m still learning.

Do you work better at day or night?

The best time for work is 10pm-5am, but I can’t do that anymore because it’s too depressing. It’s too dark, both literally and metaphorically. I mean, to wake up and see people coming home from work, it starts to mess with my reality!

What materials do you use? Do you experiment with new materials?

I really dislike experimenting with anything. I feel like I have a really tough learning curve with new materials and software programs (don’t we all). But the pencil and paper have been there for me since I was two, and I just enjoy using them so much I’d rather not move on from that. It’s a stubborn way to think, but at some point we have to stick with what we’re best at, right?

He found me. He wanted to represent me in the hopes that the Joey Fly series would continue. It didn’t.

How do you organize your workspace?

Do you have any books/projects that you love that have been rejected?

All of them! I still believe in the four or five books we have shopping around out there. They’ll be on shelves someday, I’m confident.

I always drew for kids when I was a kid, and my style never really changed!

Drawing Thru the Ages

What’s a typical workday like for you? Do you have a routine?

I struggle to work all day until 6pm, when I finally enter the zone. Then it’s time for dinner.

Anything you wish we had asked?

Yeah, there’s one question I wished you asked. The answer is beige.

Why the nom de plume?

There were a lot of illustrators/human beings that shared my actual name. Not just the first and last name either, the middle name too! I hated it. I hated not having my own identity. One day, an editor looking to hire me for a massive book deal accidentally contacted one of those other illustrators with the same name. The guy realized the mistake and was very cool about it, and forwarded the info to me, but that was just too close a call for me. What if I lost that job because of that?!

You can check Neil Numberman out here!

Full disclosure: Neil and I met working at the bookstore together and we have the same birthday! Before I knew all that, the post card of the illustration below was on the bulletin board in the stock room where we kept our coats. I liked it so much that I stole it; only to find out later that it was his! 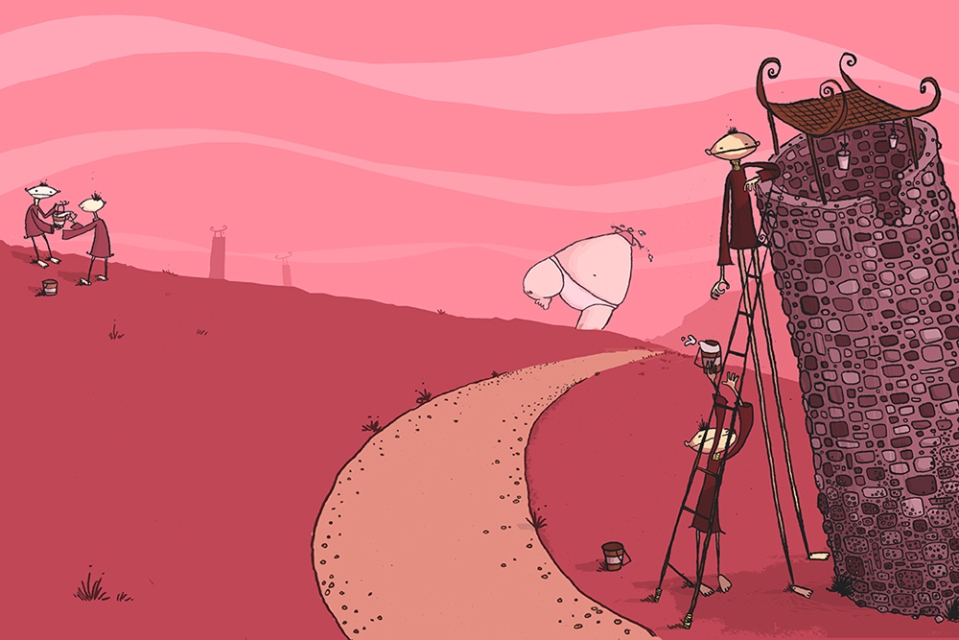