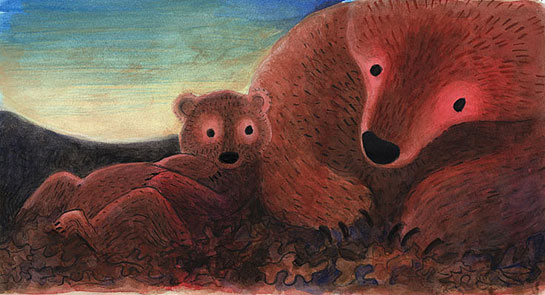 Whenever I look at Rob Dunlavey‘s work, I want to sit down with a big pile of crayons, paint, and paper, and get my hands really dirty, because he makes it look just that easy and playful. I am, therefore, delighted that he’s making the move into children’s books. I hope he stays a long while. 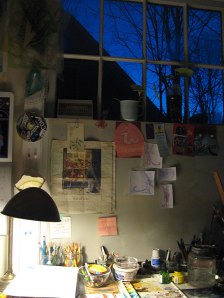 Rob’s studio: some doodling before dawn

THE DIRT ON: Rob Dunlavey

Hometown: I grew up outside of Chicago on a small farm. My father was an engineer and my mother was a singer. They had eight children and wanted to live off the land.

Now lives in: I moved to the Boston suburbs in 1985 after graduate school in Los Angeles.

Tools of the trade: mixed media of all sorts. Very immediate and lo-tech followed often by some digital heavy lifting as required.

Workspace: I use a spare bedroom in my house. Occasionally I go to Peet’s or the library to get some sketches hammered out.

Most prized studio tchotchke: prints by some of my favorite artist friends: Leo Espinosa and Alain Lachartre. My collection of African mbiras (a type of thumb piano).

Favorite children’s book…as a child: Sadly, I can’t remember the name but I remember the pictures! It wasn’t a classic. It included animals who made a makeshift submarine or rocket ship and had adventures on a rainy day –I think

…as an adult: The Happy Day by Ruth Krauss and Mark Simont (quickly followed by Goodnight Gorilla by Peggy Rathman).

YouTube video you can’t stop watching: I rarely watch YouTube videos but when I do, I watch my daughter Julia’s channel.

Your first children’s book, The Dandelion’s Tale, is out with Schwartz & Wade in April 2014. Could you share some illustrations and sketches from the book, and talk about how you made them (and the making of the book as a whole)?

I’m putting the finishing touches on a few of the illustrations and making cover and title page designs now. I can probably share a few images of work-in-progress though. I met the staff of Schwartz & Wade originally through my colleague Barry Blitt who recommended that I contact Lee Wade in 2009. I had a meeting with art director Rachael Cole and we’ve been in touch since then. They asked me in 2011 if I’d be interested in illustrating The Dandelion’s Tale by Kevin Sheehan.

After signing on, I started with some character studies and color studies:

One of the main characters is a small sparrow.

I paired it with a crow in this sketch. Even though the crow is not in the text, I thought that I might try introducing a few more characters and see what would happen. 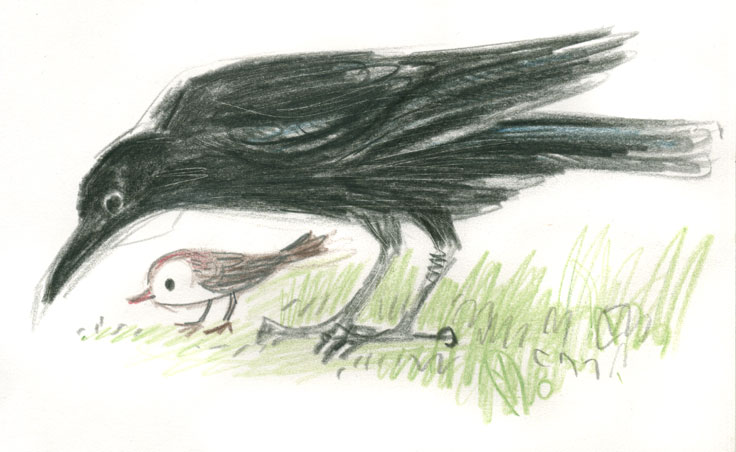 The sparrow meets a dandelion who is sad and crying. 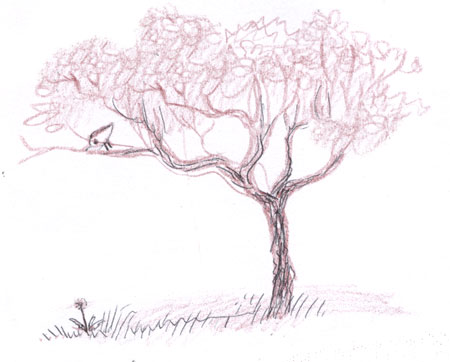 I made a few studies based on my personal sketchbook style. It’s nice nice but tentative.

Here is another of these early paintings. I realized I would learn to love the color green because the story takes place in a verdant meadow. The media used are: ink, acrylic, crayon and colored pencil. 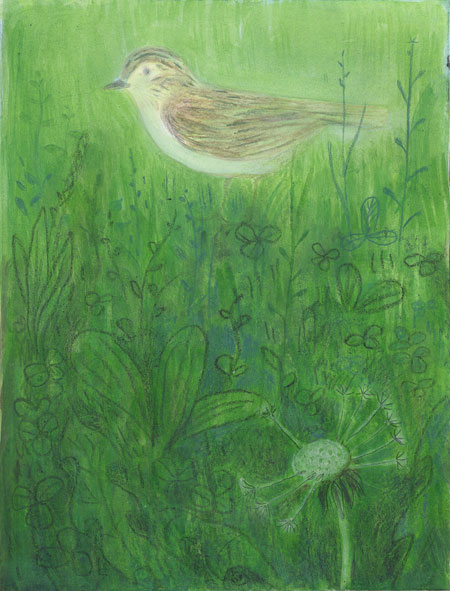 My first sketch of an early spread. The sparrow learns of the old dandelion’s dilemma.

After getting the text properly divided, I made a new sketch for this spread. The dandelion is still quite small; Rachael wanted to make sure the reader’s focus was on the two main characters and not the details on the left side of the spread. 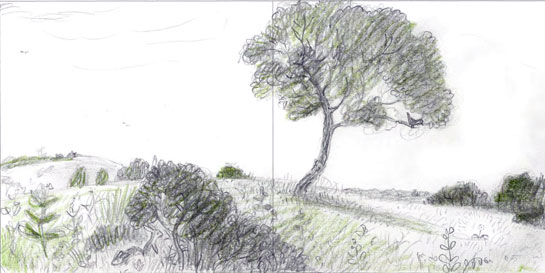 The final approved sketch. I worked in pencil and adjusted a few things and added color with Photoshop. The text on the sketch here are my comments.

The final spread. I painted it in ink, watercolor, crayon and colored pencil. The dogwood tree flowers were added digitally. 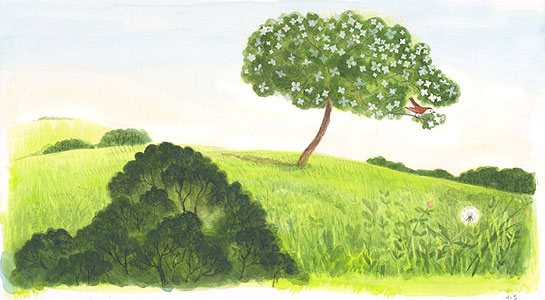 A detail of the sparrow conversing with the dandelion. 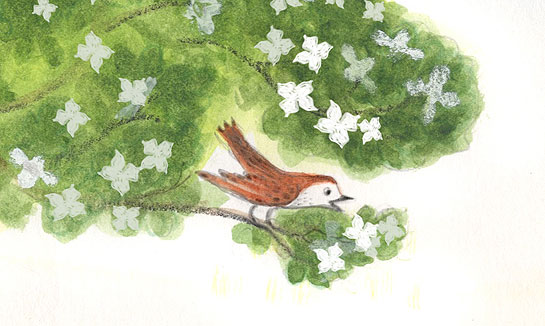 Another detail of the dandelion and the sparrow from another illustration.

In this spread, the sparrow wakes up at night in the midst of a big rainstorm. He’s worried about his new friend the dandelion. It’s a wonderful story. I’ll post more images once it’s published.

After so many years doing other kinds of illustration, how did you make the move into children’s publishing?

It’s really where I first started back in the late 1980’s. I had no clue and no success at all. I just knew very little about the illustration business in general. My MFA in sculpture didn’t really impress any publishers! My portfolio included finely rendered pen and ink drawings with timid watercolor washes. I was really feeling my way. I had to make some income from my Art so I began showing my pen and ink drawings to the op-ed page editors of the Boston newspapers (below: The Christian Science Monitor and The Boston Globe). That and a few other kinds of illustration were my career for many years –but that’s another story! 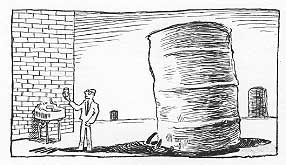 After my daughters were born in 1994 and 1997, I started working more diligently in my sketchbooks. I needed this personal time to keep my artist-self happy. Life was wonderful but chaotic and full of sacrifices of personal time. I would wake up VERY EARLY and be quiet as a mouse, make coffee and doodle for an hour or so. The habit stuck and as the girls got older, my sketchbooks became more consistent and involved. Many of my sketches were like children’s book illustrations. In 2008, a friend, Maral Sassouni, an American illustrator who lived in Paris encouraged me to look at European children’s books and to show my work to French publishers (many which are in Paris). This was the push I needed to try children’s book illustration again.

In 2009, I attended the Paris Book Fair (Salon du livre et de la presse jeunesse Seine-Saint-Denis, in Montreuil) and met with many publishers and creative directors. A few illustration jobs resulted directly from that (including a small book for Bayard Jeunesse: Bonne Nuit Petit Ours). Most of all, with the help of Facebook, I gradually made and strive to maintain contacts with people in the French graphic art and children’s book publishing world. But the wheels turn slowly and luckily I have also made contacts in the US which are starting to bear fruit. In addition to The Dandelion’s Tale I’m beginning work on Counting Crows for Atheneum and there is a new book with Schwartz & Wade waiting in the wings potentially. 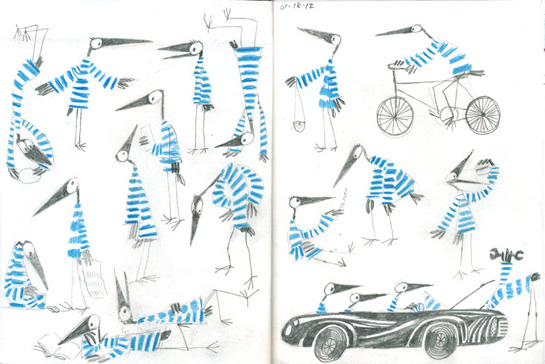 Sketchbook work: these fellows will be in Counting Crows.

What’s the difference between French and American children’s books?

OK, I’ll try to answer this question. It’s difficult because I’m still learning this business and I’ll probably contradict myself or those with more experience. As I perceived it at the time (2009), French publishers were trying lots of things and had a interest in unique characters and narratives that somehow told universal stories. There seemed to be less moralizing than in American books. They also seemed more artistically daring to me. However, like anywhere, this is a business with lots of leaders and followers that help or hinder artistic creativity. 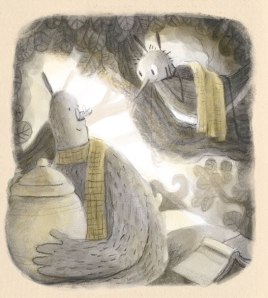 My sense is that like American publishers, European publishers are still sorting out e-books and various forms of electronic content delivery (this is what limited my work on Rififi & Azimut at Bayard). And there is always consolidation going on at the corporate level that feels destabilizing to those on the creative side of the equation. Another difference is that in France there is still an strong culture of independent bookstores, book fairs and Bande Dessinée (comic books) which is hugely important in nurturing a children’s lit-centric environment. I think there is a nascent sense of this growing in the US. I see a many international collaborations, translations and illustrators working on both continents. Yay for the Internet!

In 2009, the French publishers and agents I met in Paris seemed “exotic” (to me) and they were very receptive to my work so I felt that opportunities would flow. I’m certain that if I was more developed as an illustrator then  projects would have blossomed immediately. Really, it was just where I happened to get my start as a children’s book illustrator. Or rather, it was against this European backdrop that I started to own my new identity as  a children’s book illustrator (as opposed to as an editorial illustrator). But I barely have a toenail in the door there! A few cool projects are simmering in France and Italy and I really hope I rise to the challenge and they pan out. For now, the exciting truth is I’ve had more publishing success here in the USA  and I’m so grateful for my publishers’ and agent’s faith in me…but I’m just getting started!”

Fill in the blanks: BLUE is the new RED.

Merci, Rob! Can’t wait to see what comes next!