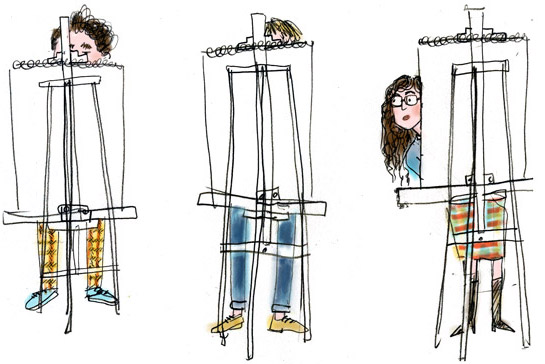 Every so often, I’m asked to name my favorite illustrators: the ones who influence me, the ones whose work I hold up to my nose with my glasses off so I can study their every pen mark and brushstroke. Though it varies slightly with the seasons, the children’s book section of the list goes something like this:

Children’s literature is a dramatically woman-dominated field. So why is this list almost entirely male?

I can speculate. The observant reader will note that I admire humor, irreverence, an energetic line, and appearance in New York periodicals.** Humor, at least humor worn in public, is mostly a Male Thing–anyone been to a stand-up show lately? Or read The Onion‘s masthead? Roz Chast is an exception that proves the rule, a phrase that never made much sense to me until now. She’s best known for her New Yorker cartoons, another boys’ club.

Illustration itself also has a long history of belonging to men. Even, to some extent, children’s illustration. But why bat around words when you can have data? I took the list of Caldecott winners and honorees since the award’s inception and broke it down by gender.*** Since 1938, there have been 310 awards. 105 of these have gone to women and 194 to men (plus 11 to couples, like the d’Aulaires), making the list 63% male. And lest you think the result is distorted by Ye Olde Sexism, the list since 1990 is 73% male; 11 of the 13 winners since 2000 have been men.

As for my list of favorites, there may be still more factors at work, but it’s hard to say. Is there really something more masculine about Quentin Blake and Neal Layton’s loosely drawn line, or Calef Brown and Blexbolex’s graphic boldness? Is it really possible to say, even though it sounds kind of icky, that I just like the way men draw?

Here’s the thing. Making the kind of illustration I like–the stuff that’s funny, or provocative, or groundbreaking, or simply drawn with a free and confident hand–takes chutzpah, a quality that tends to get socialized out of women. In conclusion: balls out, ladies.

*A couple of years ago, I got to see these two in conversation at the Society of Illustrators. All I can say is that I’ve never heard anyone discuss pig slaughter with such wicked glee.

***A small amount of additional research on unusual names was required. I must admit that I was not familiar with the work of Brinton Turkle, illustrator of Thy Friend, Obadiah.