This week P&O is thrilled to have our friend, author/illustrator, Abby Hanlon, join us for a guest post. Take it away, Abby!

My six-year-old twins are in desperate need of money right now to buy more Star Wars Legos. They have been thinking of ways to capitalize on the foot traffic on our busy Brooklyn block. The other night at 8:00 (bedtime) but still light outside, they convinced me to let them go out (in their pajamas) to set up a portrait drawing business. They brought an empty jar for money, a couple of clip boards, black pens and a stack of paper and sat on the stoop waiting for their first client. I listened from inside (feeling slightly mortified for them) as my daughter said in her most polite voice to the first person that walked by, “Excuse me, we are drawing portraits. May we draw you?” In 15 minutes, they drew three portraits and made two dollars.From inside, I listened to the small talk while each person waited for his/her portrait. Since I remained uninvolved, I don’t know what the portraits looked like, but nobody rang the bell to complain. 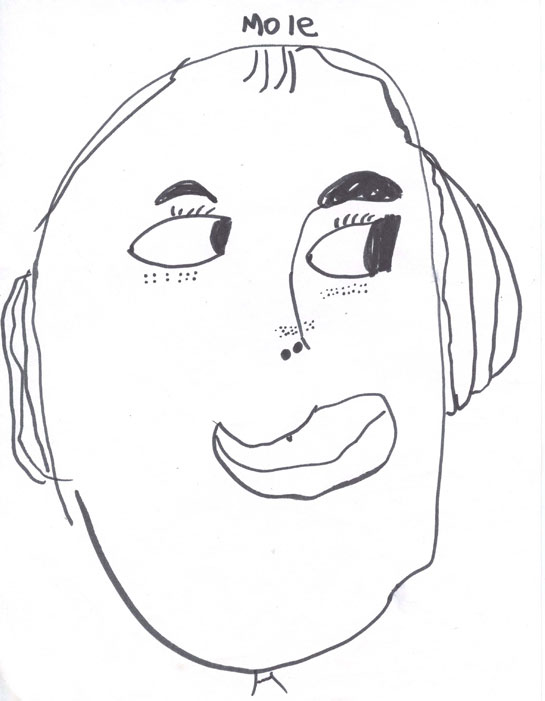 I was surprised that my kids could carry out this project with the necessary level of self-confidence because every once in awhile they are horrified by their own drawings. “This is hideous!” they scream ripping up their paper. While they don’t have complete confidence in their skills, they have never questioned their ability to be creative. It is through the physical process of creating that they communicate. The extraordinarily large inner universe of a six-year-old that needs to be communicated each day takes every possible medium. So drawing, like playing, is simply a necessity. Especially when you need more Legos.

A child versus an “alien grown-up,” which was a quick, angry scribble on an enormous piece of wrinkled paper.

I chose some of my kids’ drawings to share, most of which intentionally communicate an emotion. But I think they also unintentionally communicate a little piece of personality. As an illustrator, I want my drawings to communicate as much as theirs do. Through their playful, loose, expressive lines, I can hear what they are saying. Their lines are brazen, their lines reveal their quirkiness, their lines shout:”Freedom!!” I’ve noticed that in general my kids are unable to focus for too long on the past or the future, they fall right back into the moment. Maybe this is the secret of spontaneous self-expression.

I’ve always been drawn to illustrators who successfully convey this childlike freedom in their work. One of my favorites is Neal Layton. My son — who draws just enough to tell the story — with his messy, wild lines, reminds me of Layton. My daughter’s bold lines and simple shapes are more like Lauren Child’s. Other illustrators whose work has been praised as “childlike” include Chris Raschka, Oliver Jeffers, Todd Parr, Delphine Durand, Brian Karas and Adam Gudeon. Are there other childlike illustrators that you love? What do you think makes their illustrations effective? 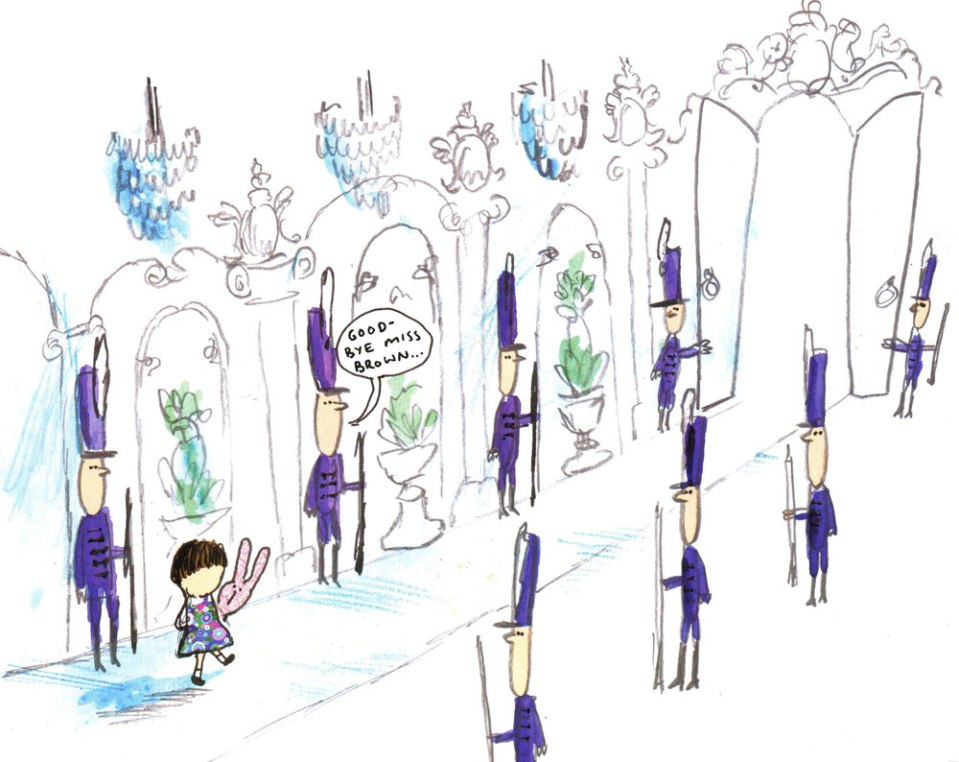 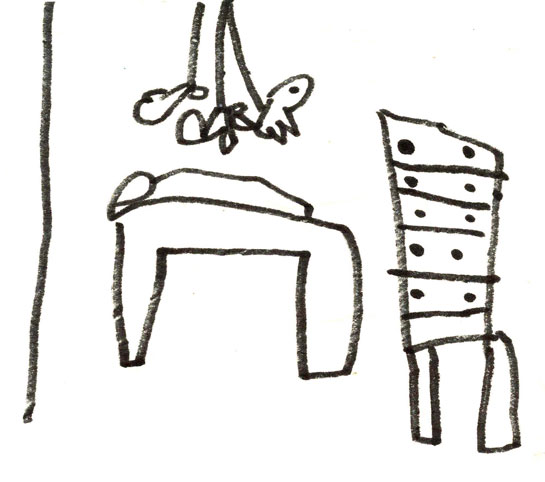 This pathetic drawing was found hanging on the hallway bulletin board at school.At the beginning of kindergarten the class was instructed to “draw your favorite part of the school day.” My son chose “dismissal” which is what the arrow laconically depicts. Not a stroke is wasted in communicating his feelings towards kindergarten. 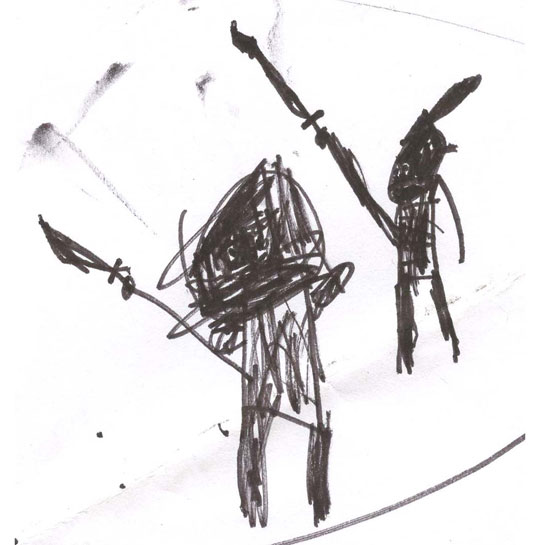 Scary guys. Maybe inspired by one of our favorite books,Tomi Ungerer’s “The Three Robbers.”

There is a puppy in the box.

“The Gnomes versus the Giants.” There is a lot more where this came from. My son has several sketchbooks filled with pages of wars, real and fictional.

“When I looked at the hermit crab, it was shriveled up.”

The stuff of childhood nightmares. 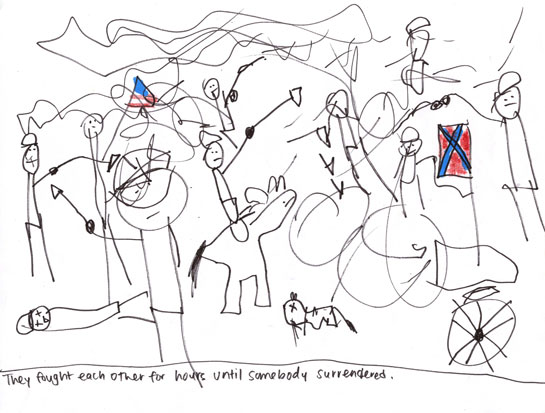 One page of a longer book on Abe Lincoln.

This princess is supposed to be saying, “I’m not going to marry you!”

I love those whimsical shoes.

“What happens in graveyards.”

A deer next to a tree in Ireland. 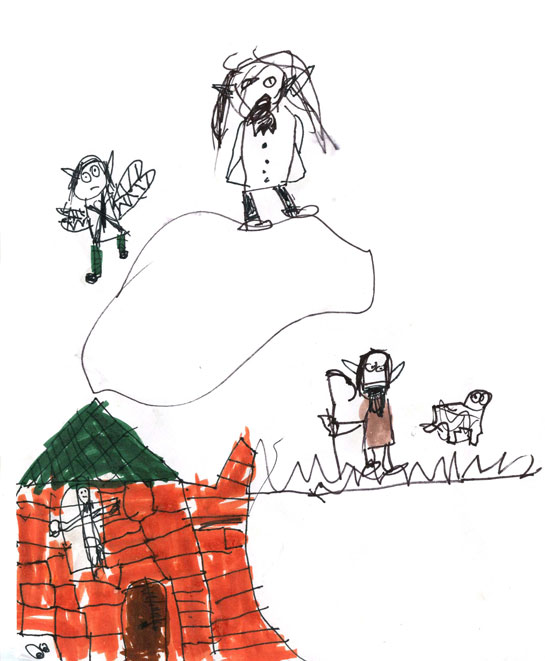 Jesus on a cloud, a fairy, a shepherd and a Catholic church (part of a series of Jesus art work that my son created to sell on the stoop.)

A composite of creepy characters with lots of sinister little details.

Big thanks to Abby and the twins! For Liz’s P&O interview with Abby click here.